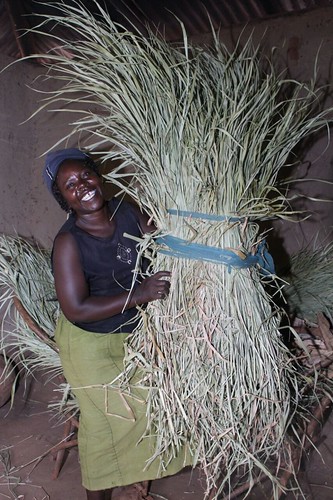 Priscilla Ouma is an inspiration and proof that when you give women farmers a few tools, the entire community benefits. Through her hard work, the wind of change is blowing across the village and soon farmers in Muyeye B will be milk rich.

Fellow farmers are proud of her efforts to ensure that they produce enough quality milk for consumption and sale and Ouma has earned a lot of respect for disseminating clean planting materials of improved fodder grasses to all households in her village.

She is a village-based dairy advisor (VBDA) who has been trained on growing fodder crops and fodder conservation techniques such as making hay and silage and managing crop residues like maize stover – while also providing extension advice. Ouma is also an agent of input suppliers.

Farm Input Promotions Africa (FIPS-Africa) under the dairy component of Feed the Future Kenya Accelerated Value Chain Development Program (AVCD) has recruited and trained 138 self-employed VBDAs like her the five counties of Siaya, Busia, Vihiga, Kisumu and Homa Bay. According to Ouma, farmers keep cows because their ancestors had cattle but they do not really know how to get the best out of them. Before the beginning of the project, average milk production in Muyeye B was less than a litre a day per cow. Today this has changed.

Farmers believed they needed large ranch-like land to become dairy farmers. ‘I never knew that managing my small land area could be profitable. I now have the knowledge of how to keep dairy cows with better management’ says Rosemary Maloba, one of the farmer in Ouma’s VBDA group. Priscilla introduced me to new grasses that I was not growing before. She gave me 300 splits of Brachiaria and 20 stems of Napier grass and advised me on how to plan my land. I used to believe that only ranchers with high-grade breeds needed to plant fodder,’ she explains.

Looking ahead, Maloba says she sell two of her local cows and buy one crossbreed dairy cow for milk. She knows the local cows will not produce enough milk. ‘I see a brighter future through the knowledge I have gained from my VBDA, am sure I will triple my milk production,’ she says.

In the same village, a farmer in the same group, Prudence Akinyi, did not know that simple and seemingly unimportant factors like clean housing and proper feeding have an effect on milk production. She has now learned from Ouma that her cow needs a clean and comfortable unit lest it be prone to diseases. She also now understands that if the cow falls sick because of unclean housing, then milk production will decrease. This is also expected if the cow does not eat enough good and quality feed.

She says, ‘I have learnt how to take better care of my cow itself—because it is the one that produces milk. I have introduced Napier grass, Brachiaria and occasionally have added mineral salts to its feed. As a result of this changes, I was surprised when I got three litres of milk from my local cow at peak time; two litres in the morning and one in the evening.” 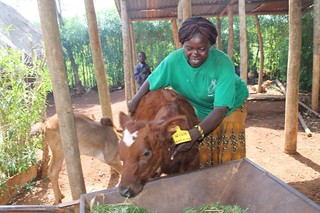 Previously, Akinyi’s cow was only producing a half litre of milk in the morning and another half in the evening.

Maloba and Akinyi are among the hundreds of smallholder farmers who are learning from the VBDAs in the dairy project. This season, Ouma has reached 89 farmers with fodder planting materials including Napier grass cuttings, Desmodium and Brachiaria splits. She has also been advising these farmers on better husbandry.

‘I want my village to produce enough fodder for our cows and surplus for sale to farmers who cannot produce,’ said Ouma. So far, approximately 11,000 farmers have received improved varieties of Brachiaria grass, Napier grass, Desmodium and sweet potato.

‘Thanks to the knowledge I have gained through the AVCD project, I am now a teacher and a producer of fodder, I am helping farmers in the village and I also secure enough income and food for my family from my work,’ she concludes.