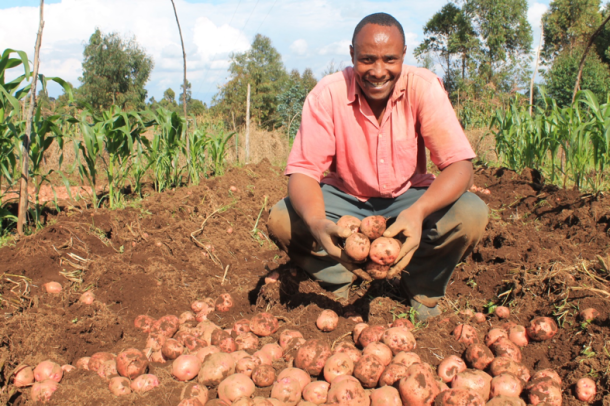 The village is densely populated, and land sub-division is evident across the hilly landscapes on the slopes of Mount Kenya. Potato is a preferred crop in the area due to the cool climate and high market demand, and Edward Kirinya is among farmers growing potato.

He started growing potato at the age of 19 to keep himself busy. Edward is still a potato farmer, he is happy that today he is well-informed and is guiding other farmers in his village to produce more potato. “I still grow potato for sale. At the same time, I provide my neighbors with advice on good potato farming practices. Nothing gives me more satisfaction than when they heed my guidance and continuously improve their productivity,” he explains.

Edward was recruited as a self-employed Village Potato Advisor (VPA) and multiplies seed potato to sell to other farmers, while also offering advice and related services to farmers on good potato management.

Farm Input Promotions Africa (FIPS-Africa) recruited 72 VPAs like Edward in Meru County under Feed the Future Kenya’s Accelerated Value Chain Development (AVCD) program, whose root crop component is led by the International Potato Center (CIP). Over the last year, each VPA provided a 1 kg promotional pack of clean seed potato to 50 to 100 farmers from their village. As a result, 4,894 farmers have set up small farmer learning plots on their own land following good agricultural practices. After observing the benefits of higher yield, farmers are now demanding commercial packs of seed potato and VPAs like Edward are working hard to supply the demand.

“I will make clean seed potato available in this village by multiplying and selling it locally, and to individual buyers from neighboring villages. This has greatly changed my status and I am no longer just the little known son of Kirinya but also known as a potato expert,” he proudly says.

Last season, ending November 2016, Edward harvested 1,322 kg of clean seed potato (enough to plant 0.66 ha). He will save 250 kg seed potato for planting next season and sell the remaining quantity to farmers in his village. Edward expects to sell each kilogram at KES 40, earning KES 42,880 (approx. US$ 428).

Edward hopes to sell off his produce locally, within two weeks, after harvesting and without incurring any transport costs.

“The market for clean seed is readily available, I am not even able to satisfy demand that exists at the moment and this is the reason why I will be growing more popular as time goes by,” says Edward.

Before becoming a VPA, Edward grew potato to help him feed his family and send his children to a good school. However, the realization of his dream was continuously hindered by low productivity caused by poor agricultural practices and an acute shortage of clean seed potato in his village and the county as a whole.

The small-holder farmer has fixed his eyes on making clean seed potato locally available for sale when other suppliers are not in the market.

“I want to produce enough seed potato within the village so that farmers do not also have to travel long distances to fetch clean seed,” he concludes. 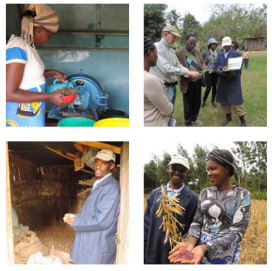