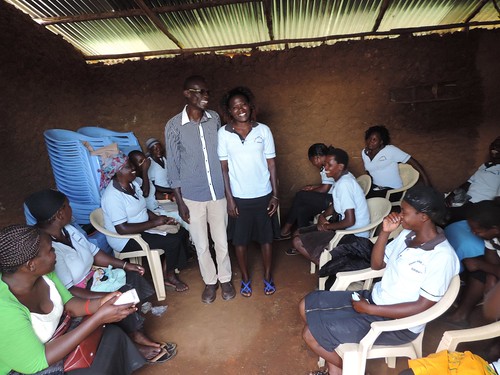 For Quinter Awour the birth of a new calf is the beginning of her investment future. Quinter is a member of Tang Ber Women Group, based in Kotieno sub location, Homa bay County, for the last 7 years she has participated in the table banking group but has always envisioned the group as a collective force for pooling resources to change their economic positions. “All the money we earn we use it in the home, we want to start investing in businesses for the future of our children,” shared Quinter.

“With the birth of new improved calves to the community. We are excited about collective dairying, growing improved fodder, poultry keeping and rearing dairy goats” Quinter stated, Things are changing for the group.

Their new interests come from a community program that is kick starting dairy farming in the area. Homa Bay County has favorable conditions for dairy production characterized by suitable agro-climatic condition and higher product prices owing to demand for milk that far outstrips local supply.  Yet this potential remains unexploited due to inappropriate breeds of cattle kept by majority of households. The community participated in a USAID funded  mass insemination program which subsidized the cost of artificial insemination, through a rapid breeding  intervention called Fixed Time Artificial Insemination (FTAI). This activity availed hormone treatment, quality seed semen and trained AI veterinary services that synchronized  a large groups of cows belonging to smallholder households. The intention is to rapidly increase number of improved dairy cows that can crowd in dairy businesses – inputs supply and services, so as to reduce the cost of dairy production.

Quinter and her husband Charles jumped at the chance to access an improved dairy calf. This new intervention was an alternative to their previous breeding option where they looked for a low level improved bull to mate their animals. “Getting improved semen was not easy, you needed a lot of money to go all the way to Kisii just to get someone who had the semen” Charles commented, “I just don’t have that money.” he continued.

After the 10-day hormone treatment, followed by insemination at a subsidized cost of Ksh. 500, compared to the market rate of Ksh. 2,500 to 3,000 one of their two cows presented for the breeding program conceived.  “I just sold the other animal that didn’t conceive, I had a family emergency and it was only producing less than 5 litres a day” lamented Charles. 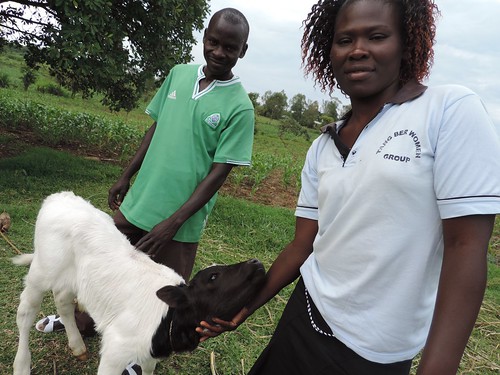 But now, with the new training on livestock husbandry and business training, Charles and Quinter are planning to profit from their new calf. They are excited about their new future with AI and plan to use the revenues/profits from increased milk yields to invest in fodder plots for personal and commercial use.

“Now that we will have access to these services, we will invest again in AI services. When our cow is ready to be served again, we are willing to pay because we have seen that improved semen is better than our traditional ways, look at this calf, just beautiful!” said Quinter.

Quinter’s women group are excited for the future in fodder bulking and milk production. Things are going to change for Kotieno location. Like other families, Charles and Quinter want the best for their children. “We have a two and half acre parcel of land, next time you visit you will see how my farm will have changed. We will have more animals and will grow more food” highlighted Charles.