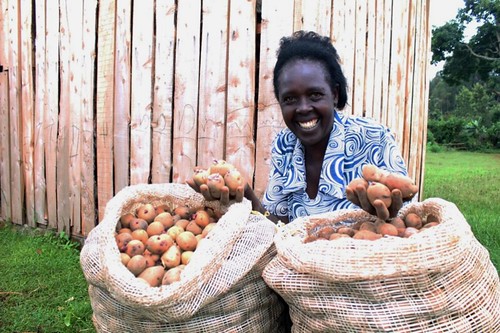 Mary Kinya is a Village Potato Advisor (VPA) for Buyene village in Meru, she says, “For so long I have lived a life of poverty, yet that does not kill my spirit”. From her hard work, Mary’s life has taken a turn in the right direction. Mary is one of 72 decentralized seed multipliers also known as VPAs in Meru County who will help improve productivity and profitability for potato farmers. Through offering advice and related services to farmers on good potato management, the VPAs become the focal point to information that can support the growth of their potato plots.

As with many other small-holder farmers in her village, Mary would use recycled seed bought from a local market and plant randomly. In spite of her hard work, the productivity of her farm was low resulting in poor harvests. Meaning she never produced enough to sell.

“I learned a lot of simple but very important practices required at different stages of potato production through training from AVCD through FIPS-Africa,” said Mary. “In the past, I only used recycled seed, I never knew the local seed I was planting was one of the reasons my potato production was poor,” she laments. “In an effort to boost my potato harvest; I sometimes would apply a little fertilizer on my recycled potato plot as well, but I didn’t know how much fertilizer was correct to use.”

Through the intervention of the AVCD Potato value chain component in partnership with Farm Input Promotions Africa (FIPS-Africa), Mary adopted the use of clean seed potato, correct spacing, good hilling and timely spraying in January 2017. She put these practices to use when setting up her seed multiplication plot. Under irrigation, she planted 350 kg seed potato of Sherekea variety.

“I was struggling in life before I became a seed multiplier but today, I am so happy! I have enough money to buy good food for my family,” Mary says. “Meat at our house was unheard of, but now we can have it any time we want!”

She’s continued to plant clean seed potato, harvest and sell to small-holder farmers in her village, and slowly she has started to improve her finances. Mary has invested part of her savings to build a diffuse light store (DLS) where she stores her seed as she waits for the tubers to sprout (pictured in photo above, behind the VPA in image 1). DLS encourage production lots of small sprouts instead of one long sprout. Many small sprouts lead to more stems and tubers, and this can double yields for farmers who buy and plant well-sprouted seed potato.

But Mary has not profited alone; farmers in her village are ecstatic too. “I have made sure that the knowledge I was taught is passed on to the farmers in my village so that we all grow together; that way we can kick that hard life of poverty out of my village,” she giggles.

At the beginning of the project, Mary gave 1 kg trial packs of certified seed potato to 100 farmers in her village together with advice on good agricultural practices to sample on their own plots. After sampling the certified seed and seeing the difference in productivity, a majority of the farmers came back to purchase larger quantities of clean seed potato from her.

Priscilla Gituma is one of the farmers who received 1 kg trial pack of Sherekea variety in June 2016. “I looked at the number of tubers and thought it was a joke but Mary taught me that it was meant for learning. From the 1 kg I harvested 11 kg of in November 2016!” she says.

“In late July 2017, I replanted 10 kg and then I ordered an additional 50 kg from Mary,” she explains. Priscilla harvested 760 kg in December 2017, had she planted 60 kg of local seed, she would have harvested less than 300 kg from the same piece of land.

Priscilla is now confident of where to get clean seed potato and reliable potato advice is just meters away. She is now very optimistic that her potato production will grow and is looking at going commercial. 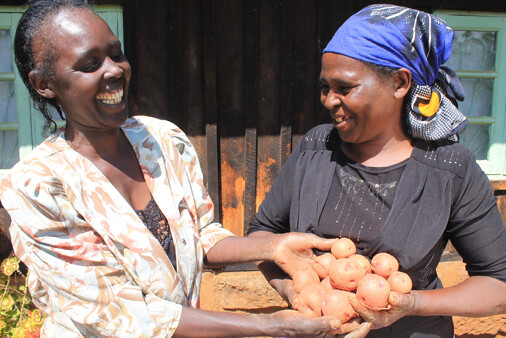 “Before I thought my life would be one of hardship, but thanks to the AVCD program, I feel free of that life now,” Priscilla says. “The future I see ahead is now bright.”

“I believe my work has paid off and potato farmers now appreciate the value of planting clean seed potato. A total of 51 farmers have pre-ordered between 10 and 50 kg clean seed potato from me for next season,” she said enthusiastically.