While farmers around Kenya struggle to grow enough maize to feed their families and their cattle, some women dairy farmers are boosting milk production and making money by growing and selling native grasses as cattle feed 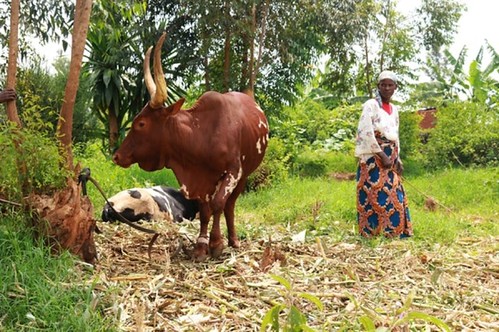 Maize Stover – the stalks, leaves and cobs left behind after a harvest – is popular cattle feed in Kenya. But it is hard to digest, resulting in low milk yields for already struggling dairy farmers.  Credit: Sophie Mbugua

Since July, Wilfrida Olaly has been paying 8,000 Kenyan shillings ($78) a month for her health insurance. This is the first time the 52-year-old farmer has ever been able to afford to pay for health coverage. It’s because she changed what she feeds her cows.

For years, Olaly had fed the animals on her farm in Muhuroni, in Kenya’s Kisumu County, on traditional maize stover – the leaves, stalks and maize cobs left in the field after a harvest. But since May, her cows have been feeding on two types of indigenous grass instead: Boma Rhodes, a drought-resistant tropical grass used mainly for pasture and hay, and the native Brachiaria, also known as signal grass. And their milk production has almost doubled.

Maize stover is the most popular cattle feed in much of Africa, mainly because most small dairy farmers depend on maize for their livelihood and usually have a surplus of stover they need to get rid of, making it cheap and easily available. But as the recurrent drought in East Africa continues to kill off maize crops, some farmers in the region are turning to alternative cattle feed, such as grass. And for some women farmers in Kenya, swapping maize stover for native grasses has given them a reliable source of food and a path out of poverty.

Olaly’s sudden milk production boost is down to digestibility. Grasses are easier than maize stover for a cow’s digestive system to break down, says John Goopy, a research scientist at the International Livestock Research Institute (ILRI).

“The animal gets more energy from the tropical grasses and benefits from the nutrients, resulting in increased productivity,” he says.

Feeding cattle on grass instead of stover also has another benefit, Goopy says: reducing the amount of methane cows emit and slowing the effects of climate change. As cows break down their food to produce energy, they also produce methane, which accounted for 16 percent of global greenhouse gas emissions in 2014. Goopy says that while cows in sub-Saharan Africa do not necessarily produce more methane per head compared to cows in developed countries, they produce disproportionately high amounts of the gas in relation to how little milk they make.

Using grass fodder instead of maize stover makes cows more efficient and better for the environment, he says.

“Feeds that are easily digestible help improve the levels of productivity per cow compared to the levels of emissions they produce, making them more producers than polluters.”

Thriving Through the Drought

Olaly had been struggling with low milk yield since she started keeping livestock in 1998. Her fortunes turned once she joined a program run by Heifer International and ILRI, which promotes the production and consumption of Boma Rhodes, Brachiaria and other grass varieties as a way to help cows make more milk and less methane.

Wilfrida Olaly says her cows are making almost twice as much milk since she started feeding them native grasses instead of maize stover. (Sophie Mbugua)

With funding from USAID, the Feed the Future Accelerated Value Chain Development (AVCD) program works with women in five Kenyan counties. As well as improving the diets of their own cattle, some of the women farmers involved have discovered they can make a good living selling grass feed to others.

In Lukuyani village in Kakamega County, Nancy Onyino, a widowed mother of five, sells hay made from Boma Rhodes with the 26 other women and four men who make up the Hema women’s Savings and Credit Cooperative Society. At first, the group was buying the grass from other farmers to dry into hay, but they quickly realized they could make more money growing it themselves.

“After we saw the high demand from within western Kenya and beyond the counties, we encouraged each member to plant depending on their land capacity,” says Onyino, 55. “Some now grow it to feed their animals while others grow commercially.” Most of their repeat customers are farmers who rely on maize to feed their cattle but regularly find their crops destroyed by drought, she says.

Unlike maize, which can usually only be harvested once a year, the fast-maturing Boma Rhodes grass is ready to harvest every four months. Onyino invested in an acre of it in March 2017 – by June, she had harvested her first 180 bales and then harvested another 200 bales in October. She sells each bale for 300 shillings ($3), and plans to plant another acre in February.

To help each other out in times when their yields are not so successful, every member of the Hema cooperative contributes five bales per year to sell as a group. Onyino says the proceeds enable members in need to apply for loans, and the group saves 500 shillings a month that goes to paying young people to help harvest and bail the hay.

In a region where women make up as much as half of the agricultural labor force but get only a fraction of the financial gain, the women of the Hema cooperative are seeing numerous benefits to growing grass. Along with selling Boma Rhodes, some of the group members also feed it to their dairy cows, which produce enough milk to sell to Brookside Dairy Limited, the largest processor of its kind in East Africa.

“Selling as a group has given us bargaining power, as we no longer sell to middlemen,” Onyino says.

For George Ochuodho, a project manager at Heifer International, the successes of farmers like Olaly and Onyino show the value that women can add to Kenya’s economic health. He says the future of the country’s agriculture lies with women.

“For the dairy industry to succeed, women must be actively involved not just in labor but within the entire value chain,” he says.

Olaly, who now teaches other farmers how to grow and harvest grass fodder, says changing to a more sustainable and efficient cattle feed means she no longer has to borrow money from her husband. And now he no longer dismisses her ambitions as a farmer.

“He is not only supporting my farming, but it has motivated him to fence off the entire land to prevent animals from trespassing on the grass, and more importantly he has allowed me to allocate more land to fodder production,” she says. “I never thought this would happen.”