Just through feeding her cow on Brachiaria grass and proper maintenance, a smallholder farmer in western Kenya has improved her milk yield more than two-fold. 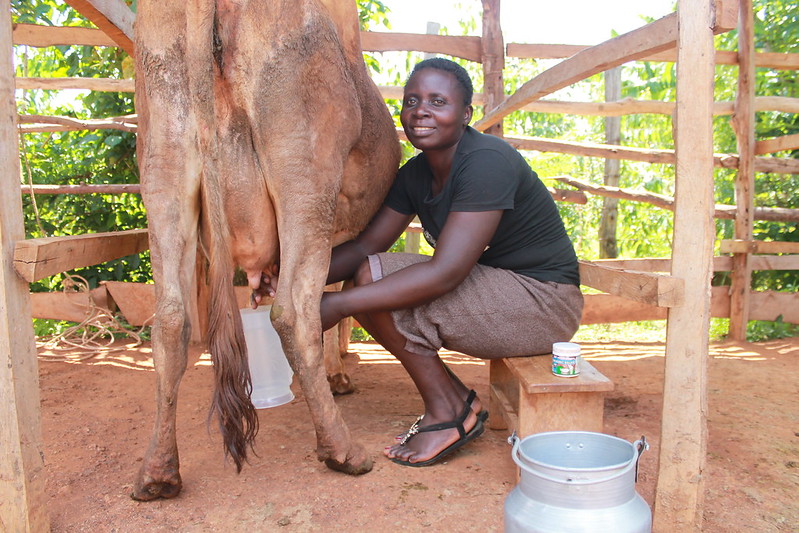 It’s about 5:30 pm and the farmer just heard her cows’ loud moo — a sign that they want to be milked- a time Lilian Ochieng’ marches confidently to her cow pen. Lilian, a smallholder in Siaya County in the western part of Kenya, puts down the bucket, moves one of the cows to the milking pen and occupies a stool beside it. She washes her hands, then the cow’s udder with warm disinfected water after which she dries the udder with a clean towel. She starts milking the cow as her last-born son watches on, maybe to learn a thing or two.

This is the very cow that used to produce as low as five litres a day. Today I milk up to 13 litres a day, she proudly says as she gently handles her cross-Guernsey dairy cow.

In 2014 when the cow calved, the farmer milked twice, at 6:30 am and 5:30 pm getting 3  and 2 litres respectively. “There was no routine check on my cow’s health, I only used to invite the veterinarian when I had some extra money in my pocket or when I realized it had taken too long before a check,” she explains.

“I never paid a lot of attention to my dairy cow, all I knew was that it needed to have a shed, feed on Napier grass and drink water once a day. There was no day I ever bought mineral salts for my dairy cows,” she says.

Many farmers in western Kenya commonly complain that they invest in dairy cows with huge expectations of increased milk productivity, only to get far less. So what is Lilian’s secret that has seen her milk production increase more than two-fold to 13 litres a day? 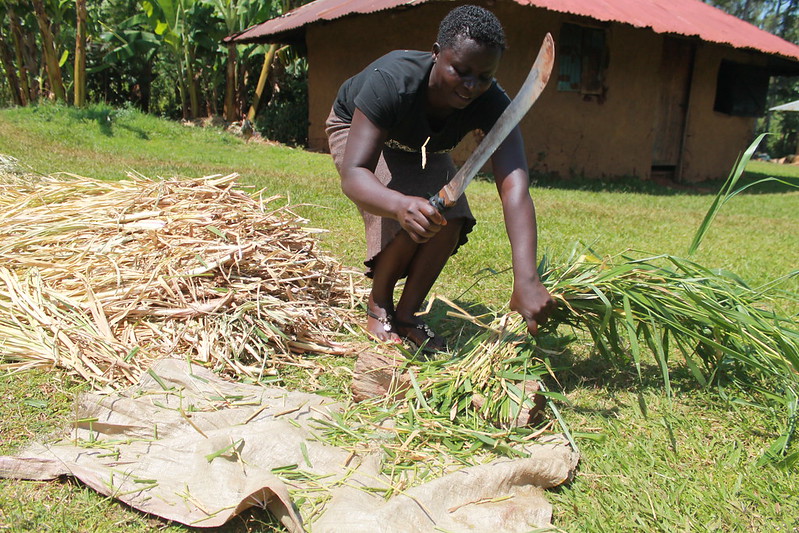 “The secret lies in proper feeding with improved fodder and supplements such as mineral salts as well as de-worming, tick control and proper housing,” explains the smallholder farmer. “I learnt this when I was trained as a Village-Based Dairy Advisor (VBDA), and now I have seen it practically!”She says proudly

The VBDA model is a private-sector led extension approach based on trained and commercially-oriented village dairy business advisors providing extension advice, while also acting as agents of input suppliers. This model not only maximises on the power of knowledge sharing among farmers, but also empowers farmers to intentionally reach out to others and extend their knowledge. Farm Input Promotions Africa (FIPS-Africa) under the dairy component of the Feed the Future Kenya Accelerated Value Chain Development Program (AVCD) has recruited and trained 128 self-employed VBDAs like Lilian in four counties of Siaya, Busia, Vihiga and Homabay.

FIPS-Africa has also made accessible improved fodder varieties- such Brachiaria, disease-free Napier varieties, Desmodium and Caliandra- to the VBDAs who also share the planting materials with their farmers. VBDAs have also encouraged farmers to plant dual-purpose maize varieties which upon maturity provide both grain for the household and fodder for the cattle.

‘As a VBDA, I reach 100 farmers or more in a season. I provide them with planting material for fodder crops and offer spraying services to control the ticks. I also link the farmers with veterinary service providers so that they can also increase their milk production like me.’

In addition to proper feeding and feed management, Lilian further buys mineral salts with phosphorous and calcium for her cow to increase milk production and facilitate the cow to come on heat much faster after calving.

Out of the 13 litres of milk Lilian gets per day, she uses 4 litres to feed her calf, 3 litres for her household and she sells the rest to farmers within the village. Lilian records a total of KES 360 (USD 3.60) a day from selling the remaining 6 litres at KES 60 per litre. She saves most of the money for school fees and for treatment of the cattle.

Lilian keeps two dairy cows and a calf, on her 1-acre farm in Usaha village, Sidindi Ward in Siaya County. One of the dairy cows is currently pregnant and not providing milk. She expects to see further increases in milk production after it has given birth.

FIPS-Africa is an implementing partner in the dairy component of the International Livestock Research Institute (ILRI)-led AVCD program whose goal is to increase milk production and productivity and to improve on household nutrition across 9 counties in Kenya.