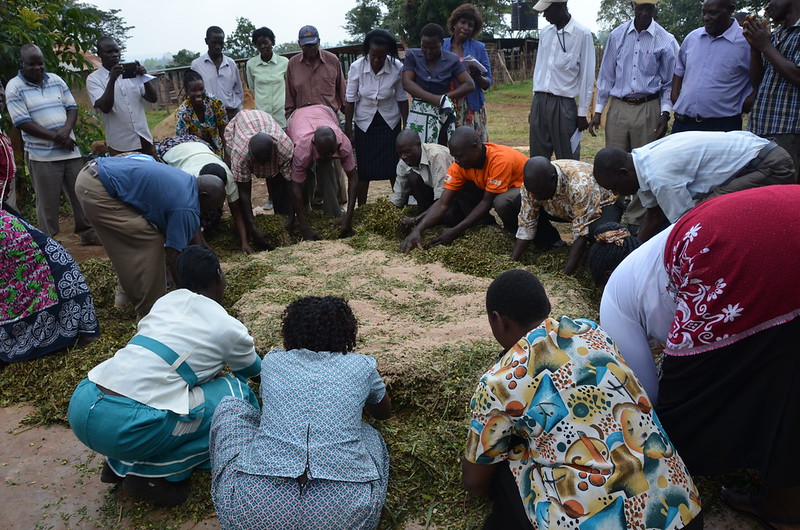 A group of farmers in Kisumu County of Kenya promise to lead the western region of Kenya as the next frontier in dairy production.

The farmers, who have demonstrated incredible willingness and readiness to tap into opportunities towards increased dairy production in the region, are registered as a community based organization known as Osiepe Practical Action.

Consisting of 57 small-scale farmers from Muhoroni sub-County keen to commercialize their production, Osiepe Practical Action has been at the centre of a research for development project that is accelerating the dairy value chain development in parts of western and eastern Kenya.

The project promotes inclusive participation of all stakeholders in agricultural development and recognizes farmers as major stakeholders whose participation is fundamental for increased and timely uptake of technologies and innovations towards improved production.

Putting farmers at the centre of research for development interventions
When the project began (in early 2016) its interventions in western Kenya, its approach involved working with groups of farmers to roll out and promote interventions that will enable farmers in the region to enter the lucrative dairy industry. Osiepe Practical Action was not only readily available, but had existing structures and was prepared to implement the activities.

The group has been very successful in mobilizing farmers to take up animal breeding and health interventions as well as improved feed and forage innovations.

Over the last six months, Osiepe Practical Action has placed Muhoroni sub-county in the lead, with the highest number of cows that have been taken through the accelerated breeding intervention (316).

With the help of the International Livestock Research Institute (ILRI) – led project, the CBO was able to construct 14 crush pens that are used for the breeding activities. Prior to engagement with the CBO the project had managed to vaccinate 231 animals against ECF in Muhoroni sub-county, an initiative that will now be enhanced via the structures that have been put in place by Osiepe Practical Action. Members of the group have also established 8 acres of Brachiaria grass that is known to increase milk production by 30%.

Let’s have more
So successful has the group been in marshaling collective action, that they have received policy makers’ recognition. Last month (December 2016), the Kisumu County government launched its dairy value chain development program, featuring Osiepe Practical Action as a model that will be influential in unlocking the potential of the lucrative dairy sector in the region.

Present at the launch was the Kisumu County Minister of livestock development, who was accompanied by more than 17 officers from the County office including the deputy livestock production officer and sub county crops, livestock and fisheries officers. The Minister mentioned that the county government will work to replicate the Osiepe Practical Action model across the county.

Osipe Practical Action was highlighted as a highly successful example of how far collective action can take rural communities. Professor Christopher Onyango from Egerton University, the Keynote Speaker during the event, commended the group and urged them to continue harnessing their social capital, to build their resilience and exploit the research-based interventions available.

Speaking at the launch, the project’s coordinator, James Rao from ILRI expressed his appreciation of the group’s responsiveness.

In Muhoroni sub-county, we found a group of farmers that had a high level of preparedness to tap into the availed opportunities and take off with innovations and new technologies. Said Rao.

Osiepe Practical Action has demonstrated that with well-established and functioning community based organizations, you are able to realize development objectives much faster.

The project mentioned here is the Feed the Future Kenya Accelerated Value Chain Development (AVCD) which seeks to apply technologies and innovations for selected value chains to sustainably reduce poverty and hunger in the Feed the Future zones of influence in Kenya. Led by the International Livestock Research Institute (ILRI), the dairy component of AVCD purposes to improve milk production, productivity and availability at household level.