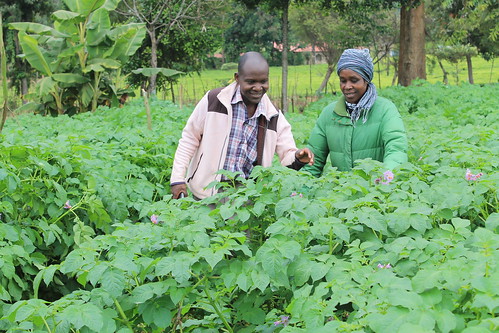 “Farmers are excited and they are very happy about this,” says Daniel Nyaga, FIPS-Africa field staff. The farmers are happy with a good reason! For Fridah Nkirote her family farm in the green and hilly countryside of Nkuene on the slopes of Mount Kenya has never been more productive. In July 2016, the mother of four – who manages the farm – harvested the largest, healthiest potatoes she says she has ever seen. “My VPA gave me and many other farmers 1 Kg of clean seed potato to try. I asked him where I could buy more clean seed for my plot,” explains Fridah.

After the VPA directed her, Fridah made an effort and purchased another 50 kg bag of seed-potato. Four months later, Fridah’s farm yielded a bumper harvest of 500 kg of potatoes – more than twice what she normally gets! Fridah remembers her previous harvest “I used to hardly harvest enough to sell because I planted ware potatoes. But now I can be sure that I will harvest enough to eat and sell.” Through the 1 kg pack, farmers in Nkuene are becoming increasingly aware of the benefits of clean seed potato, but there is a dire shortage. Even when seed is sold, farmers doubt the quality because of many rogue traders.

Daniel Nyagah, FIPS-Africa’s Network Coordinator, explains that there is an acute shortage of seed potato in the County generally, but especially within the villages. “Because most farmers do not know where to buy clean seed, they usually resort to buying ware potatoes.” The only major supplier of seed in the County is Kisima Farm, which is 40 Km away from Nkuene. The more adventurous small-holder farmers may dip into their pockets to make the trip to buy clean seed but this means additional transport costs, which are difficult to bear for the farmers. “A 50 kg bag of seed potatofrom a certified commercial seed supplier costs KES 2,500 (USD 25),” explains Nyagah. In addition to these costs, farmers in Nkuene would need to pay two-way transport for themselves and extra for the potatoes.

This is why there was a dire need for sources of clean seed in Meru. Self-employed VPAs are making seed-potato more affordable and accessible to farmers by multiplying it in their home villages. The VPAs then earn an income selling seed-potato and offering advice and related services to farmers on good potato management.

Farmers are pleased with the new AVCD program saying it is much cheaper to buy the good quality seed potato locally from their VPAS. The VPAs are already selling the seed potato to farmers KES 2000 (USD 20) for a 50 Kg bag. This will substantially improve productivity and returns for potato farmers in target villages.

“Now that I know where to buy seed potato, my dream is to go into commercial production and pay for quality education for all my children,” concludes Fridah.