Isaac Mugedi, a 43 year-old farmer from Bungoma County first heard of OFSP in 2013 through the International Potato Centre (CIP). Since the 2015 start of the Accelerated Value Chain Development (AVCD) program, his role in as a OFSP farmer have evolved significantly. Today he multiplies vines, produces roots and provides extension services to OFSP buyers.

When asked why he has his interest in provision of extension services, Isaac replied ‘To make money! I want my vine buyers to apply good agronomic practices to ensure they get a profit. Actually, when I am not available, my wife supervises weeding for some of my clients”.

Cyspine Asembo, one of Isaac’s clients has planted 12 acres of OFSP this season. Her target is to reach 20 Acres before the end of the season. ‘I want to buy a car from OFSP farming’, says Cyspine, a teacher by profession.

Isaac has used income from OFSP roots and seed vines sales to diversify his sources of income. He attests to have bought 4 dairy cows, 45 sheep and 13 pigs since last year, thanks to OFSP farming.

Between March and June 2016, Isaac has planted 9 acres of OFSP and still expanding. With a smile he says ‘Even if you want 30 tonnes of OFSP roots today, I can give you”.

For Isaac, neither OFSP roots or vines go to waste. Any unsold leftovers go to fed his pigs and dairy cows “I substitute molasses with OFSP roots for my dairy feed, which I process at home” Isaac commented.

Isaac Mugendi is one of 30,000 farmers targeted to improve storage and marketing of fresh OFSP roots in western Kenya. The sweet potato value chain will reach at least 65,000 households with children under five in western Kenya with productive and nutritious OFSP varieties and nutrition education. Approximately 50% of the households will receive support with post harvest utilization and marketing to increase the value of sweetpotato sales by at least 15%. 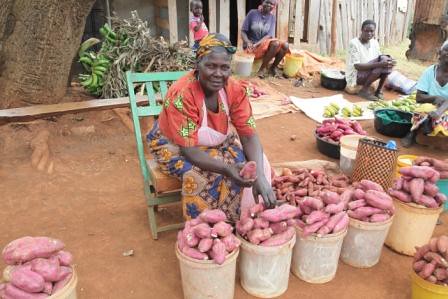 Orange Fresh Sweetpotato (OFSP) varieties are rich in beta-carotene, hence a source of vitamin A to combat vitamin A deficiency (VAD) in women and young children. In Kenya, where 84% of children below 5 years and roughly 20% of women are affected by VAD, OFSP has great potential to reduce VAD in these target groups. Sweet potato is grown across diverse agro-ecologies, ranging from high rainfall to semi-arid regions, hence a reliable food security crop. The potato sector is valued at 500 million USD annually and provides employment opportunities for two million Kenyans along the value chain.

Superior new varieties of orange-fleshed sweet potato (OFSP) are released in over ten countries in Africa, yet are not available to producers in requisite quantities and quality. Improved technologies and techniques for accelerating multiplication and marketing of planting material and ensuring quality control have been developed and proven to increase the adoption of superior varieties.

The Feed the Future Kenya Accelerated Value Chain Development program seeks to widely apply technologies and innovations for selected value chains in order to competitively and sustainably increase productivity, contributing to inclusive agricultural growth, nutrition and food security in the country. Isaac’s story is only an example of the numerous technologies our program is utilising in our journey to achieving make farming a business to sustainably reduce poverty and hunger across Kenya.